History of First Creek (The Creek)

First Creek would like to start by acknowledging the traditional lands, where we are located, of the Wonnarua tribe of the Kuringai nation and pay our respects to Elders past, present and future.

First Creek, the actual creek that we name ourselves after, played a huge role in Pokolbin, supplying high quality water to many of those first vineyards in the Hunter Valley. The vineyards that we draw our grapes from today are fed by First Creek which runs from East of Wine Country drive, starting at Black Creek, and navigates to the west of Mcdonalds road just behind Pokolbin Leisure Inn. 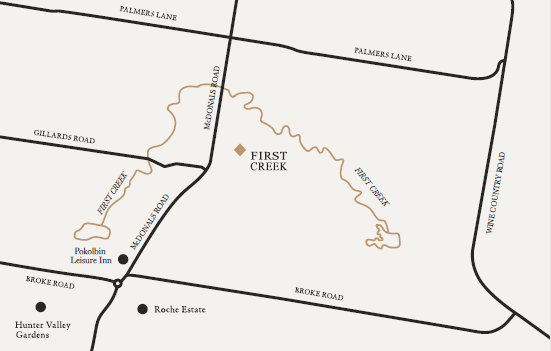 History of First Creek (The Winery)

It all began in 1998 when our founders, Greg and Jenny Silkman, purchased a parcel of land bordered by First Creek in the Hunter Valley. Greg’s vision was to improve the quality of the Hunter’s boutique wines with a sensitive bespoke approach supported by traditional winemaking and state of the art technology. The following years saw remarkable innovation and success. Our first bottling line was purchased in 2000 and Shaun Silkman completes his first vintage in 2001.

It wouldn’t be until 2005 that the first bottles of First Creek wine are released with Greg Silkman as Winemaker. It was around this time that our bottling line also expanded with its second line. Liz duxes the Len Evans tutorial in 2006 (described as the most exclusive wine school in the world). Two years later Liz would join the First Creek team in 2008. Fast forward through a few good years of wine and Liz wins ‘Winemaker of the year’ in 2011’s Hunter Valley legends and Wine Awards. First Creek would see many firsts in the next 10 years. Especially with awards and trophies flooding in. Including Best Hunter Valley Chardonnay.

Commenting has been turned off.